In order to see some of these awesome natural landscapes in all the glory that they deserve you may need to wake up ridiculously early, travel an hour, hike a tad bit, and then muscle your way into the viewing gallery. If you're coming from Moab, Utah this is easily an hour drive to Mesa Arch. It's a scenic drive at least.

The hike from the parking lot is nothing. The real issue is getting into position and trying to contend with elbow to elbow photographers and their tripods. Luckily, two years ago when we did this trip we had met a nice gentleman and he let us in next to him. He was from the Chicagoland area so that was an added bonus. Even though I thought we were way ahead of schedule for sunrise we were like the last "photographers" to show up that morning. 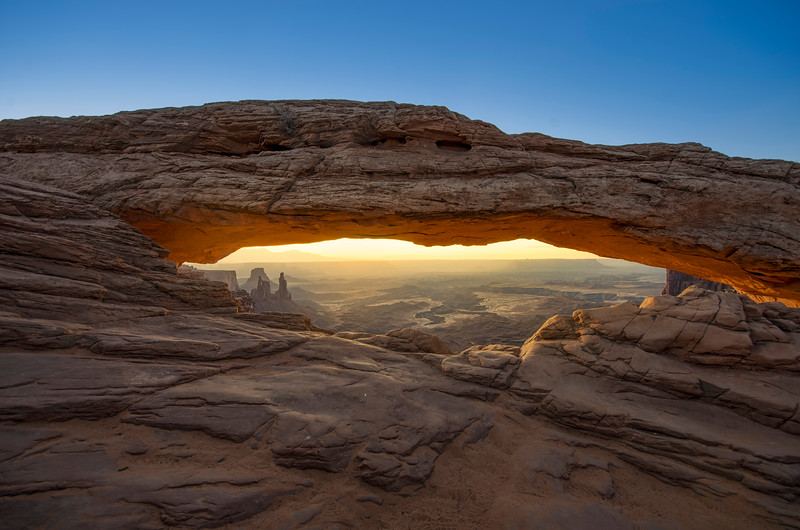 I wasn’t in the best of locations, I’ll admit since I showed up “late.” If I were 10 or 15 feet to the right the image may have looked a bit different than this, but we work with the space constrictions we’re handed sometimes. I used a Pentax K-5 with a 10-20mm Sigma lens on a tripod.

For this shot I bracketed five exposures (-2, -1, 0, 1, 2) for a full dynamic blend. I knew that the bright morning sun would add a lot of contrast to the shadows and that it would blow out the highlights of the sky. My thought process was that I would be able to take one of the negative exposures and blend it into my toned image. Because I went through the arch and because I show above the arch I had a lot of light hitting my sensor blowing out the highlights and rendering everything white.

I originally used Photomatix 32-bit HDR through Lightroom to blend the exposures, but the results were less than thrilling. So, I manually claimed the -2, 0, and 1 exposure for a manual blend in Photoshop. I layer masked in areas from all three exposures to get the tones right. After that I did the normal processing of dodging and burning to get a little more or a little less light out of the image.

*Bring your wide angle lenses. You have no choice but to be super close to the Arch when shooting here since people crowd the invisible line in front of the arch.

*Make friends. These photographers are just like you. They're trying their hand at getting the shot too.

*Sunrise is the time to go.